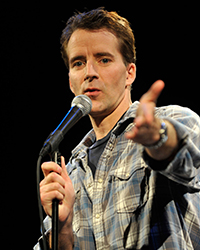 It’s been a busy time for NH’s Juston McKinney, having been featured on a Showtime Special with Rob Gronkowski “Unsportsmanlike Comedy”, performed at the TD Garden with Denis Leary & Jimmy Fallon as part of “Comics Come Home”, and just released his new stand-up special, “Parentally Challenged”. He has two previous Comedy Central Specials, including his own one-hour, multiple appearances on the Tonight Show, and on Conan O’Brien, but there’s no place like home!

When NH magazine named him “Best of NH” they wrote, “The Granite State may have more famous comedians than you can shake a stick at (Seth Meyers, Sarah Silverman and Adam Sandler to name a few) but no one really “gets” New Hampshire humor like Juston McKinney.”

His Youtube/facebook channels have millions of views, which include NH favorites such as “Clark’s Trading Post”, “Live Free or Die” and “Live Freeze then Die!”.

Juston was born in Portsmouth and raised on the seacoast. He currently lives in New Hampshire with his wife, kids and dogs. Presented By JJR Productions