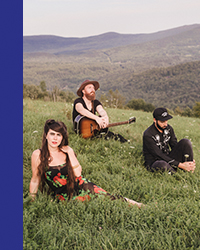 Burlington Vermont's own sensational soul singer, Kat Wright is returning to SHOWROOM on December 10. Wright, whose voice is both sultry and dynamic, delicate yet powerful; gritty but highly emotive and nuanced, has been described as “a young Bonnie Raitt meets Amy Winehouse”. Add to that voice enough stage presence to tame lions, and the combination of feline femininity proves immediately enchanting. There’s soul flowing in and out of her rock ‘n’ roll with a serpentine seduction. Wright sings gently like a heartache’s apology. It’s funky in spots and beautiful all over. And it hurts a little … as it should.

Wright will be performing with Bob Wagner (guitar) and Josh Weinstein (bass), showcasing their folky/rootsy selves, all stripped down, a triangulation of their strengths, their bareness, their imperfect humanness, their voices, their ferocious tenderness, their love of songs and singing and story. The acoustic trio made its live debut supporting The Wood Brothers in early 2020 with stops at the newly reopened Webster Hall in New York City, The Fillmore in Philadelphia and the Ryman Auditorium in Nashville, Tennessee. Wright has supported Kacey Musgraves, Grace Potter, Marco Benevento, Rubblebucket, Lawrence, The Preservation Hall Jazz Band, The Wood Brothers, Leftover Salmon, Ryan Montbleau, Soulive, The Motet, The Original Wailers and Leon Russell. And in 2019 she teamed up with the Vermont Symphony Orchestra for a unique sold-out show featuring roughly 40% Wright songs and 60% classical works.