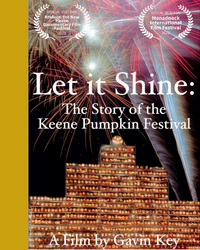 From 1991 to 2014, the small city of Keene, NH was home to the world-famous Keene Pumpkin Festival.  With over 9 Guinness World Records for most lit jack-o-lanterns in one place, and 50,000 to 80,000 people in attendance every year, the Pumpkin Fest made national attention every October. Every year, the Keene community would come together in an attempt to break another world record, and the results were often magical. In 2014, the festival was shut down indefinitely after nearby rioting from college students.

This heartwarming documentary from local filmmaker Gavin Key tells the complete 25-year history of the festival and the story of how one community can come together for something spectacular. The project, which took roughly two years to complete, is Key’s first feature-length film and was funded by a Kickstarter campaign. While “Let it Shine” is centered around the Pumpkin Festival, the film is really a celebration of Keene and shines a light on its’ amazing community.