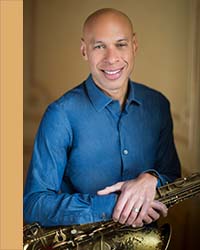 
Joshua Redman is one of the most acclaimed and charismatic jazz musicians to have emerged in the 1990s. A Bay Area native born and raised in Berkeley, CA, Redman is the son of renowned saxophonist Dewey Redman and dancer Renee Shedroff. After graduating summa cum laude from Harvard in 1991 with a B.A. in Social Studies, he deferred his admission to Yale Law School for one year so that he could indulge his passion for making music. Five months after his arrival in New York City, he won the prestigious Thelonious Monk International Saxophone Competition, which marked the beginning of what would become an illustrious career spanning nearly three decades.

Often lauded for his ability to perceive and develop prodigious talent early on, Redman formed his first permanent quartet as a bandleader in 1994, which resulted in his seminal work MoodSwing, with Brad Mehldau on piano, Christian McBride on bass and Brian Blade on drums. These musicians have gone on to become some of the most illustrious and influential musicians and bandleaders in modern jazz. The group recently reunited for the newly released RoundAgain.