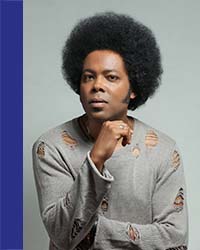 “Staying true to his Spanish language Folk-Funk-Rock hybrid has paid off.” — Billboard

Singer-songwriter, musical visionary and proud recipient of Latin Grammy and Juno Awards, Alex Cuba is one of the 21st century’s most respected Latin artists. Blending pop, rock, and soul with Latin rhythms and a uniquely melodic touch, Cuba has captured the imaginations of music fans across the globe and worked with a varied cast of pop luminaries, including Nelly Furtado, Ron Sexsmith, and Jason Mraz. His sugarcane-sweet melodies, pop-soul hooks and powerful guitar riffs, relinquish a conventional stereotype that exemplifies much of the Latin music landscape.

Born in Cuba, Alex Cuba was the son of a gifted guitarist and music teacher – he started playing at just six years old, drawing from a variety of influences to steadily develop a style that’s entirely his own. After a move to Canada, he released his debut album as a solo artist in 2004. Humo de Tobaco earned him a Juno Award for World Music Album of the Year, an achievement which Cuba doubled in 2008 when he was given the award a second time in recognition of his sophomore record, Agua Del Pozo.

His musical evolution for years has been all about searching for the simplicity and soul in Cuban music – taking apart the complex arrangements, mixing it with North American influences, adopting the melodic simplicity of pop music, looking to Cuban folk traditions for inspiration – he’s always exploring, always creating something fresh and new, and always, it seems, getting it just right.