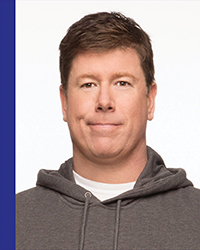 Jimmy Dunn is a comedian and actor who is most recognized from the CBS sitcom The McCarthys, where he co-starred as Sean McCarthy.

He got his start in the comedy world performing stand-up at a bar in Gloucester, Massachusetts, where he was paid in beer and fried clams. Since then, Jimmy has gone on to perform on some of the comedy world's biggest stages, including Montreal’s Just For Laughs Comedy Festival, The Late Show with David Letterman, CONAN, and Comics Come Home with Denis Leary.

Boston Sports fans know Jimmy from his many appearances on NESN (The New England Sports Network). He was the co-host of Fan Attic, a classic sports highlight show for the Bruins and Red Sox, and wrote and hosted "The Traveling Fan" segments on the Red Sox Pre-Game Show. He was also the wise-cracking voice of Sox Appeal, the Emmy award-winning dating show that took place inside Boston’s Fenway Park.

When home in New England, Jimmy co-hosts the “Two Boston Guys Whack Up a Pie” podcast with his friend and fellow Boston comedian Tony V.

Jimmy is also a published author. He’s written three books, including Your Kid’s First Poker Book, considered by many as the best book ever in the children’s self-help gambling.